RestArt is a yearly urban art festival in Imola, born from the idea of the curator Cesare Bettini, and produced by the non-profit organization Noi Giovani. The concept behind RestArt is to regenerate and redevelop, both visually and materially, areas and walls of the city of Imola, that suffered decay and lack of maintenance over the years. In 5 years since the first edition of the festival, and thanks to over 40 artists that have been part of it, RestArt managed to renovate and improve various neighbourhoods around the city. This year’s edition, from 14th to 16th of September, obtained the seal from The European Year of Cultural Heritage 2018.

RestArt Collective is a group show with 9 artists: Ale.Senso, Aris, Awer, Corn79, Dissenso Cognitivo, Macs, Mr Fijodor, NemO’s, Seacreative.
They either painted during previous edition of the Festival or for “T.A.G.” sponsored by Gruppo HERA and produced by Noi Giovani, a side project that started earlier this year where electric towers and cabinets in different areas of the city are being decorated with murals.

The idea behind RestArt Collective is to look back at the previous editions, showing that the work of street and urban artists isn’t just what can be seen outside on public walls, but can be appreciated in term of beautiful artworks painted on canvas, wood, metal and paper, that everyone can bring inside their private homes.
The show is a mixed collection of original artworks, with a wide range of techniques and materials used by the artists, reflecting how different can be the approach when producing either public walls or gallery artworks, the same creative process behind RestArt Urban Festival: the expo can be seen as journey between city and territory, proving that Imola is one of the most creative and painted city of Italy.

Ale Senso
Alessandra Senso Odoni was born in Bergamo, Italy, in 1977. While studying fine arts in Milan at Brera Academy in 1996 she decided to start doing graffiti and urban art, with workshop and educational projects. Her work, with a simple and direct trace, is full of symbolism and citation taken from a collective imagination, mixing elements of illustrations with fantasy worlds. She painted twice in Imola: a council house in 2016 and this year for an electric cabinet for “T.A.G.” project. Since 2011 she lives and works in Berlin, Germany.

Aris
Born in Viareggio, Italy, in 1978. He started his career as a train writer, then moving to walls, preferring abandoned or decayed places. He transitioned from spray cans to acrylics and inks, painting abstract and bidimensional figures that live in an imaginary parallel world. In conjunction with this years Festival he will paint an electric tower for “T.A.G.” project. He lives and works in Viareggio, Italy.

Awer
Born in Polignano a Mare, Italy, in 1986, since early 2000 he started doing graffiti and urban art, painting hypnotic and dreamlike creatures, trying to take away the viewers’ mind from problems and boredom of everyday life. In 2016 he painted a council house for RestArt Urban Festival. He lives and works between Berlin, Germany and Milan, Italy.

Corn79
Riccardo Lanfranco, was born in Turin, Italy, in 1979. He started painting graffiti in 1996, then moving to urban art, public installations and urban regeneration projects, constantly researching new techniques and experimenting with many different materials. In 2001 he founded “Il Cerchio e le Gocce”, the first Italian organization dedicated to promotion of urban creativity. He was part of the first edition of RestArt, painting an underpass of the race circuit “Enzo e Dino Ferrari”. He lives and works in Turin, Italy.

Dissenso Cognitivo
Self-proclaimed “individualistic collective”, since 2012 he started painting urban spaces, studying the relationship between living beings and environment, imagining a dystopian future without human beings but lived by genetically modified organisms, made of flesh and metal, that collide and contaminate each others in a sensorial oxymoron. He painted a mural in the first edition of RestArt Festival and created a site-specific installation in 2016. He lives and works in Ravenna, Italy.

Macs
Antonello “Macs” Piccinino was born in Lanciano, Italy, in 1978. Since early ‘90 he started doing graffiti, developing over the years a career as graffiti artist, illustrator and graphic designer, with a unique and original style. Painting characters sometimes dreamy, or melancholy, funny or sarcastic, but every time distinguished by a disarming expressiveness, that stimulate thoughts in the observer. He painted a mural in Imola in May 2018, for the side project “T.A.G.” sponsored by Gruppo Hera and organized by Noi Giovani.

Mr Fijodor
Fijodor Benzo, born in Imperia, Italy, in 1979. Since 1994 he started doing graffiti and urban art, painting walls with simple lines and shapes, that conveys direct messages to the viewers, often intended to be social or environmental critiques. He painted twice in Imola, in the first and fourth edition of the Festival. He’s member of “Il Cerchio e le Gocce” and since 2004 he lived and works in Turin, Italy. 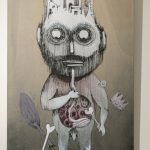 NemO’s
He’s been drawing since he was a child, developing his artist career as street artist and muralist. He prefers to paint with brushes and rollers instead of spray cans, to have a stronger connection, both emotional and tactile, with the walls he’s painting. The subject of his work are humanoid characters, a graphic translation of his thoughts and feelings, in relation with the social and cultural condition where human beings are forced to live. He painted a wall in Imola in 2016. He lives and works in Milan, Italy. 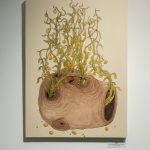 Seacreative
Fabrizio Sarti, born in Varese, Italy in 1977. Inspired by Barry McGee and Phil Frost, he started painting in early 90’s, using paint and brushes on walls. Since 2000, after evolving his style and technique, he founded the project “Sea Creative”. His style and characters are linear but technically complex, aiming to transform a plain and meaningless wall in something colourful that can be reinterpreted in different ways by the viewers. He was part of the fourth edition of RestArt. Nowadays he lives and works between Milan and Varese.