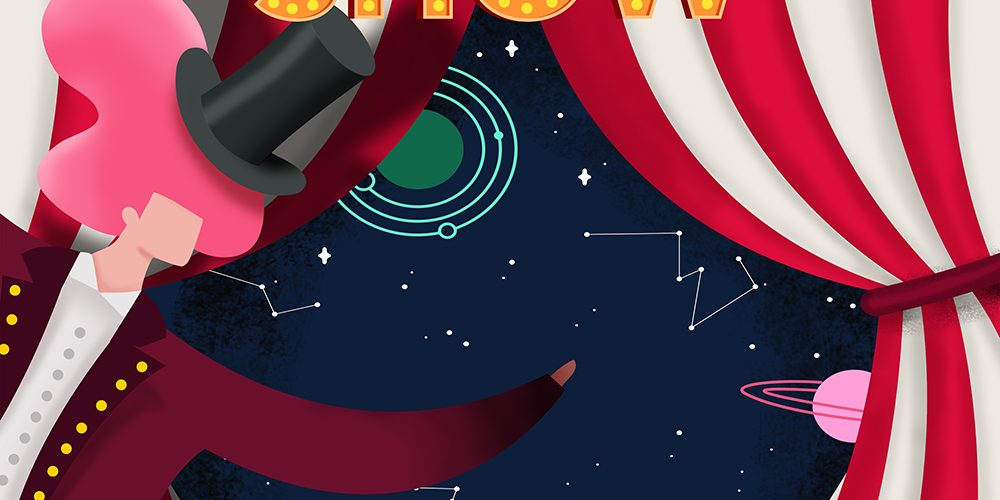 Tales of Art gallery in Imola, Italy, is excited to be showing its most ambitious group show to date, Universes, curated by Sasha Bogojev.
Opening on October 13th the exhibition will include all new works by 10 international artists which although diverse in most aspects of their artistic practice, strongly rely on creating their own spectrums of characters, settings, and events. Taking references from life experiences, popular culture, or plain imagination, each piece is somewhat of a portal into a new, unknown dimension buzzing with fantastic events and inhabited by peculiar characters. Figurative at their very core, these paintings, drawings, and sculptures, are frequently including elements that can define them as surrealist, illustrative, comic, pop-art, or even abstract. Unrestricted with the factuality and uncompromising rules of reality, they are great examples of that irresistible point where imagination, creativity, and artistic talent meet. Rendered using different techniques and visual languages, the characters, and scenarios around them are ultimately standing for artistic freedom in its purest form. Universal and unpretentious in their conceptualization, the selected works are passively inviting the observer to immerse her or himself into these visuals and enjoy the brief journey through the Universes.
The artists on show:

Ador is a French graffiti artist who has been successfully extending his practice into a studio work. Often using his quirky, cartoon-like characters to create some sort of a social commentary, he is this time focusing on subjects of appearance, food, money, and performance. Questioning our relationship with nature, Ador is critiquing the way we perceive food through surreal scenes from the lives of his big-nosed characters. Using comic-like aesthetics mixed with graffiti elements, the artist is able to create an entire cosmos filled with signature characters and narrative rich scenarios. 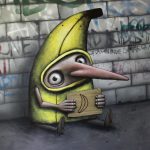 Ana Barriga is a Spanish artist that’s been creating vibrant images that are playing with the imagery and elements borrowed from real life. Using various household items as center points of her works, subjects if you wish, Barriga applies a variety of mediums to create the most unusual setting or atmosphere for these everyday objects. Applying vivid colors through expressive painterly approach with notable brushwork and texture, her energetic creations are the result of her unmediated play with reality.

Calvin Wong is Oakland based-artist working with playful ceramic objects which are filling up his own quirky universe. With accented features such as nose or ears, these characters are easily transformed into functional everyday objects such as cups, pots or vases. Along with those, Wong is working on a series of sculptural pieces which are commenting on everyday life and routines, or taking phisical form of well known phrases.

Darren e Trisha Inouye, aka Giorgiko are art duo from the US who are painting their work based on their life experiences and beliefs. Reducing their characters to almost stickman-like simplicity, but often adorned with elaborate accessories, they are able to depict a specific time and space in their work. From paying tribute to art history to referencing popular culture phenomenon, their imagery carries a classic painterly value while through very contemporary, almost video game-like aesthetics.

Edgar Plans is a Spanish artist who managed to never let go of the playful child inside of him. Through his work, he continues drawing simple childhood characters that are often getting involved in bizarre or simple, everyday activities. Keeping the aesthetic of spontaneous, unmediated drawings or sketches, his works are regularly adorned with the alluring, heavily textured oil paint mosaic-like sections.

Kobusher is an artist from the Philippines who is using the ideas set by established art movements to reinvent the recognizable popular culture iconography. Mostly working with cartoon or comic characters, he is experimenting with familiar images by using classic Cubism methods, but limiting them within the same cartoon/comic aesthetic. The results are vibrant abstract creations that our pop culture-obsessed brains recognize instantly but have trouble reconstructing. Meticulous and very clean in their technical execution, Kobusher’s amusing creations are somewhat of a tribute to the contemporary popular culture.

Peter Chan is a prolific LA-based artist who is using his creativity to interact with the life around him. From capturing the mundane life elements to creating a whole universe of imaginary characters and scenarios, it is Chan’s peculiar color play that constructs a particular atmosphere around his work. Often creating realistic images from patches of color, some of his works can be described as a contemporary take on expressionism.

Peter Opheim is an NYC-based artist that is gaining worldwide recognition with his ongoing series of PlayDoh inspired creatures. Depicted as simple assemblages of crude lumps of modeling material, these playful creations are rendered with oil on canvas or wood, or watercolor on paper. By capturing these imaginary, and often real-life figures in his work, Opheim is adding artistic value to innocent child play. Through the smoothness of oils and expressive brushwork, he achieves weighty depth and light effect, successfully capturing the raw texture of clay along the way. Keeping the unusual spirit of his subject matter as a bait for the observer, the images can be seen as sort of a parody of the classic portrait format, but also, an embodiment of common emotions. 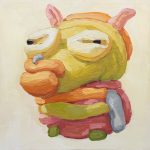 Peter Schenck is an NY-based artist who is creating a whimsical imagery that utilizes the Picasso’s signature cubism aesthetic within playful expressive drawing and painting. Through his work, Schenck regularly comments on his life experiences, using a variety of symbols as metaphors for different emotions or activities. Mixing vibrant colors, expressive brushwork and accenting the light and shadow play in his work, he is creating energetic images that are hiding many recognizable elements between seemingly abstract forms.

Super Future Kid is an UK-based artist that has quickly created a large following online with her energetic and vivid creations. Approaching her work as a fun-filled activity, her imagery is filled with oversaturated colors and neon-like line work and effect. With those elements, she constructs most unusual, often humorous characters, which are regularly named accordingly. She recently extended her studio practice by working on sculptural pieces which will also be introduced in this exhibition.